You may view Buyer's Guide listings for this location. 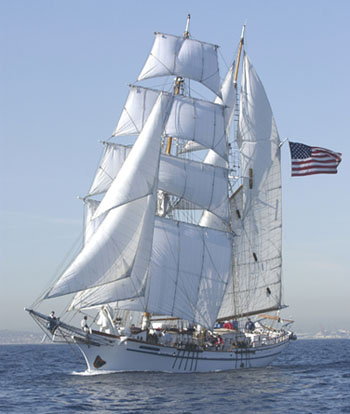 Mark Twain famously quipped that a man with one watch knows exactly what time it is; a man with two is never sure. A nice example of that is provided by Internet news sites, which make it possible to pull up different newspaper articles describing the same event.

I thought about that when reading today about Craig McCabe, a lawyer who lives aboard his powerboat Heather in Marina del Rey. McCabe was singlehanding the boat from Marina del Rey to Newport Harbor this past Thursday, when he fell overboard and ended up spending more than five hours in the water.

Meanwhile, his boat wandered off on its own and eventually plowed into Catalina Island, prompting a search for the missing boater. He was plucked from the water near a buoy that sounds like it might be the LA Harbor entrance buoy. But first he was overlooked by a passing fishing boat, almost run down by a passing freighter, clung to a balloon and some driftwood, recited the 23rd Psalm, and was threatened by a territorial sea lion.

The articles all pretty much agree on these dramatic apects of the story. But there seems to be an interesting looseness regarding more basic information like how old McCabe is (58 or 59, depending on which article you read), and how long his boat is (either 50, 55, or 65 feet).

Anyway, you can read the articles and try to figure out the details for yourself:

All the articles seem to agree that McCabe was checking over the side to see if his boat had snagged a lobster pot when he fell in, which is easy enough to believe. But I find myself wondering if it might actually be that McCabe is embarrassed to admit that the real reason he was leaning over the side was that he was peeing.

Photo: McCabe, along with his daughter Kelly and Dr. Jonathon Lawrence, at a press conference Friday at St. Mary Medical Center in Long Beach. Photo by Bruce Chambers of the Orange County Register.

Geronimo on Track for Transpac Record

After starting off LA on Saturday, November 12, the 110-foot trimaran Geronimo encountered 12 hours of light winds before returning to port and re-starting on Sunday. The boat has been averaging 25 knots since then, and is currently 702 miles from the finish line in Honolulu. Details from SuperYachting.com: The LA to Honolulu challenge.

Over the last 24 hours the Capgemini and Schneider Electric trimaran Geronimo has been eating up the miles as the Franco American crew pull out all the stops to break the current transpacific sailing record that stands at five days, nine hours, 18 minutes and 26 seconds set in 1997.

Updated information received from onboard Geronimo is that for the four hours from 13 17 to 1701 November 16 UTC the boat had covered 86.25 miles averaging 23 knots boat speed point to point.

The giant ocean record breaker has 822 miles to go to cross the finish line and if all the crew can maintain a 14.80 knots average boat speed from their current location to the finish line they will have their third speed sailing record in four months.

The Log’s Marisa O’Neill has written an interesting article about Geronimo, the world’s largest trimaran, which is in our local waters (Update: er, was in our local waters — she left on the 13th) in anticipation of an attempt on the Transpac-course record: Trimaran eyes Honolulu record.

The 110-foot maxi trimaran Geronimo – fresh from Tahiti – will briefly make San Diego her home before attempting a record-breaking run to Honolulu, planned for next week.

Geronimo sailed into San Diego Bay at about 8 a.m. November 6 after sailing 4,000 miles in 12 days from Tahiti. She will stay at Driscoll Boat Works on Shelter Island while she prepares to break the Transpac speed record of 5 days 9 hours 18 minutes and 26 seconds.

“We want to make her very light for this record,” French skipper Olivier de Kersauson said. “Then we’ll go to Hawaii, stop two days – no more – then come back.”

Upon her return, Geronimo will remain at Driscoll’s until January. Then it’s on to San Francisco, Yokohama and Hong Kong.

At first I didn’t have a good sense of the boat’s scale from that image. When I looked closer, though, and realized that the boat is twice the length of the largest boat I’ve ever sailed on, I said, “whoa.” That would be something else to sail on — or even to see passing by on the water. Look quickly, though; she isn’t going to be there for long. :-)

Welcome to SoCalSail. As you can see, the site is now running a weblog on its home page. In addition, I’ve added some new features in the site’s Buyer’s Guide. I look forward to adding a lot more content and features in the days ahead; in the meantime, please feel free to poke around and offer your feedback.

You can submit comments in response to individual weblog postings (like this one), or you can send me email at jbc@socalsail.com.