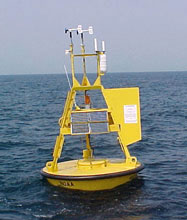 I’m not sure why, but the NOAA weather buoy data that I display on SoCalSail’s Current wind observations page stopped updating at 3:00 a.m. local time today. It looks like it’s a problem at NOAA’s end; hopefully they’ll have it straightened out shortly.

Update: Which it looks like they did, since things are working again as of the next day. Hooray!

The team sailing ABN AMRO One continued their winning ways during the Cape Town in-port race today, taking first place (and 3.5 points in the overall competition) to cement their position atop the Volvo Ocean Race fleet. Strong winds (up to 40 knots) and flat water in the lee of Table Mountain worked well for the boat, which extended its lead at each mark of the course. Details from the official VOR site: Tables turned.

Other excitement during the race included ABN AMRO Two running aground on the first leg (but holding on to finish third), and spectacular wipeouts during gypes by Pirates of the Caribbean and movistar (the latter while en route to a second-place finish).

I remember when I was 16 or so, going out on Victoria for the start of a buoy race in LA Harbor with the wind gusting to 40 knots. I was working the foredeck, and I can remember realizing just how difficult it was going to be to hoist the blade jib with the wind blowing that hard. Intellectually, I knew that the force of the wind in a sail increases as the square of the wind’s velocity, such that a 40-knot wind is not twice, but four times, as powerful as a 20-knot wind. But knowing it intellectually and experiencing it firsthand were two different things.

That race ended up being cancelled due to the rough conditions, and I confess to being relieved at the time. Wind that strong was more than I really wanted to race in, and I give credit to the crews of the Volvo Open 70s that competed today. At the same time, 40 knots in flat water is one thing. Sixty knots or more in the huge seas of the Southern Ocean, which is what these teams may be facing shortly, is something else again.

I’ve been driving back and forth through Malibu over the last week, which has given me a front-row seat for some of the huge surf we’ve been having in Southern California. The LA Times has an article today about some of the people who’ve gotten into trouble with the waves, including a young man who apparently was killed when the boat he was in capsized off Ventura. From Deadly high waves batter coast:

Late Friday, an 18-year-old remained missing after a small boat carrying him and three other family members capsized in rough seas near the mouth of the Santa Clara River, officials said.

The skiff carrying a father, two sons and his daughter capsized about 12:30 p.m. roughly 100 yards from shore, authorities said.

Three of the family members made it to shore, but one son did not, said Fire Marshal Glen Albright of the Ventura City Fire Department.

The others were taken to Ventura County Medical Center with minor injuries. Authorities searched for the missing man until darkness fell. The search is expected to resume this morning.

The article also describes how a surfer drowned off Carlsbad State Beach on Thursday, and how the Venice Pier has been closed until further notice due to damage from the waves. The surf is expected to subside over the next few days, before building again next week.

Photo: That’s a still I snagged from an unauthorized video clip that’s been floating around the net for a while. It shows Mike Parsons being towed onto a big wave at Jaws on Maui during a competition a few years ago. If you haven’t seen the video it’s definitely worth a look. One commenter claimed the clip is from the movie Riding Giants, but having watched that movie I didn’t see that clip in it (though the movie is very much worth watching, regardless).

Update: Oh, and now another source I googled up indicates that the clip is actually from the beginning of Billabong Odyssey. And since brief moments of the clip appear in the film’s trailer, I’d say that’s a pretty good bet.

Later update: So I’ve now watched Billabong Odyssey, and I can tell you that yup, it’s definitely from that movie. It’s basically the first minute of the film, with Parsons’ big wave (which was the high-scoring wave at the Tow-In World Cup in January 2002) also being featured in the extended coverage of the event toward the end of the film.

I posted previously about my automatically generated wind maps. Now reader Charlie Houser writes to tell me of a very interesting variation on the same idea. It’s apparently being produced by the US Navy’s Pacific Meteorology and Oceanography Detachment at Point Mugu. Anyway, check it out: Southern California wind analysis.

They’re using the same weather buoy data I’m using. But they’re augmenting it with a lot of additional readings from shore stations, and (this is the cool part), they’re interpolating between the stations to produce forecasted windspeed and direction across the area between and around the observing stations.

I’m not sure how sound that methodology is; my racing sailor’s sense is that especially during light-wind conditions, the interpolated vortexes this system seems to produce bear relatively little relationship to the actual winds you’d find out on the water. But in stronger-wind conditions, I’d think that interpolation between the various stations would actually do a pretty good job of predicting real wind conditions.

Anyway, I thought it was pretty interesting. Thanks for the tip, Charlie!

Posted in Weather | Permalink | No Comments »

A nasty storm a couple of days ago in the Bay of Biscay, followed by ongoing mayhem from strong tradewinds, have knocked out 5 of the 10 60-foot trimarans competing in the doublehanded transatlantic race currently under way between Le Havre, France, and Bahia, Brazil.

Here’s a writeup from Latitude 38 with aerial photos of the capsized Orange Project and Foncia: Snap, crackle and pop at Transat Jacques Vabre.

As if starting the biennial doublehanded transatlantic race in 25+ knot, on-the-nose winds and rough seas weren’t enough for the 19 monohulls (Saturday start) and 16 multis (Sunday start), Sunday night a cold front rolled in, blasting primarily the multihull fleet with 35 to 45-knot winds and reported 20-ft seas. In the wee hours of Monday, EPIRBs went off on the 60-ft trimarans Sodebo and Orange Project. The former snapped off its port ama and capsized. The latter suffered a broken main beam and also went upside down. Three hours later, at 0615, a report came in that Foncia had also capsized. With the retirement of Brossard earlier on Sunday with a cracked main hull, that takes four of the ten 60-ft multis out of the running. The six co-skippers of the three capsized boats were rescued, some more banged and bruised than others but all okay. At this writing, their smashed boats were all either under tow back to land, or about to be.

Later, Groupama-2 pitchpoled (apparently) and capsized (definitely). Here’s a write-up from sail-world.com: At around 1750 GMT tonight, the 60ft multihull Groupama-2…

The prevailing conditions at the time were classic Trade wind 25 – 30 knots from the North East. The trimaran was sailing downwind and it is presumed that therefore the hull pitchpoled on capsize but this is not confirmed.

What we do know is that Franck Proffit was at the helm and was thrown violently forward, and has possibly broken his ribs. A helicopter has been sent from the Canaries to the zone to pick up Franck Proffit from the boat in order to give him immediate medical assistance.

Franck Cammas is staying on board in order to commence a salvage operation for the boat with his shore team. Groupama-2 had been pushing hard all day after their 5 hour pit-stop in Santo Porto at Madeira between 0400 – 0900 hrs local time this morning to repair their steering and rudder systems, and had been clocking average boat speeds over 25+ knots.

That brings to 5 (of 10) abandonments in the 60-foot trimarans of the ORMA class. Also retiring have been two of the Open 50 trimarans, and one of the Open 50 monohulls. So far the boats of the remaining class (Open 60 monohulls) have not suffered any retirements.

More info on the ongoing racing is available from the Transat Jacques Vabre official site. You can also check out cool realtime position maps of the survivors at the French-language site http://voile.esrifrance.fr/.

I remember how excited I was when I first saw the progenitor of that page a number of years ago. That was back in the mid-1990s, when doing cool things on the Web still had a clubby, subversive feel to it. Here, I realized, was the work of a kindred spirit, someone who felt the way I did about putting useful content online.

In a funny coincidence, I subsequently was at the second annual Perl conference, and struck up a conversation with the young man I happened to be sitting next to. We asked each other the standard Perl conference question (“So, what are you doing with Perl?”), and I practically fell out of my chair when he told me that he worked for the National Weather Service in Florida, and had recently used Perl to put together a little CGI application to report observations from weather buoys.

His name was Dave Faciane, and meeting him was definitely one of the highlights of that conference for me. I’ve lost track of him since then, and several years ago the application he built was moved to a new server and his name removed from the credits, but I remember that chance meeting, and thinking about it now reminds me of those good old days when the Web was first being imagined into existence.

Anyway, give the new weather observations page a try, and let me know if you notice any problems.

Some day soon I hope to update it to do automated processing of the buoy data, so I can display a version of the map with near-real-time wind data graphically displayed on it. From that it would be a short step to doing an animated version of the same map so you could see how wind conditions had been changing over the last 24 hours.

I think that would be pretty cool. And I bet Dave Faciane would get a kick out of it if he saw it.