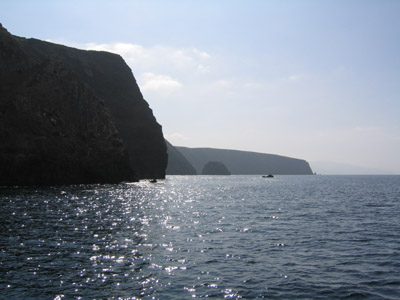 I learned today from an article in the Los Angeles Times that the National Park Service is once again allowing landings and overnight camping on Santa Cruz: Camping ban on Santa Cruz Island is lifted.

According to the Times:

The National Park Service has lifted a temporary ban on camping on Santa Cruz Island, imposed in November to ensure public safety while hunters taking aim at the island’s feral pigs focused their efforts near camping areas.

The park service said the $5-million pig hunt was necessary to protect the endangered Santa Cruz Island fox. Since last April, a New Zealand-based hunting company that it hired has killed about 4,800 pigs and cleared an estimated 85% of the island, said Yvonne Menard, a park service spokeswoman.

This entry was posted by John Callender on Tuesday, March 21st, 2006 at 6:55 am and is filed under Cruising, Northern Channel Islands. You can follow any responses to this entry through the RSS 2.0 feed. You can leave a response, or trackback from your own site.