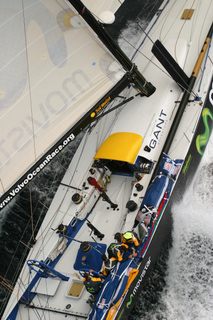 This morning the captain of Volvo Ocean Race entry movistar, after a night spent fighting severe leaking from the failure of one of the pivot points of the Spanish entry’s canting keel, chose to abandon ship. movistar was about 300 miles from the race’s finish line in Portsmouth, England, at the time. Lots of interesting detail is available from the official VOR site: movistar abandons ship.

The boat’s ten crewmembers transferred via liferaft to ABN Amro Two, which had turned back to assist movistar and had been standing by throughout the night. The transfer was made during relatively light winds as the eye of a northern storm passed over them, but one of the main factors in movistar skipper Bouwe Bekking’s decision to abandon the vessel was the forecast for winds gusting to 50 knots. “Ten lives at stake, with a similar number of families, the right call,” Bekking said in an interview from ABN Amro Two.

movistar is currently adrift, with a radio beacon transmitting the boat’s position.

In other VOR news, most of the boats have reached Portsmouth, ending the last long-distance leg of the race. Unsurprisingly, this leg was won by the overall race leader, ABN Amro One. Two shorter races remain.

Photo: A shot of movistar taken before the beginning of the VOR, by Sally Collison / www.sallycollison.com.

This entry was posted by John Callender on Sunday, May 21st, 2006 at 8:58 am and is filed under Racing, Safety, Volvo Ocean Race. You can follow any responses to this entry through the RSS 2.0 feed. You can leave a response, or trackback from your own site.